WARNING!!
Lots of words and lots of photos to follow. 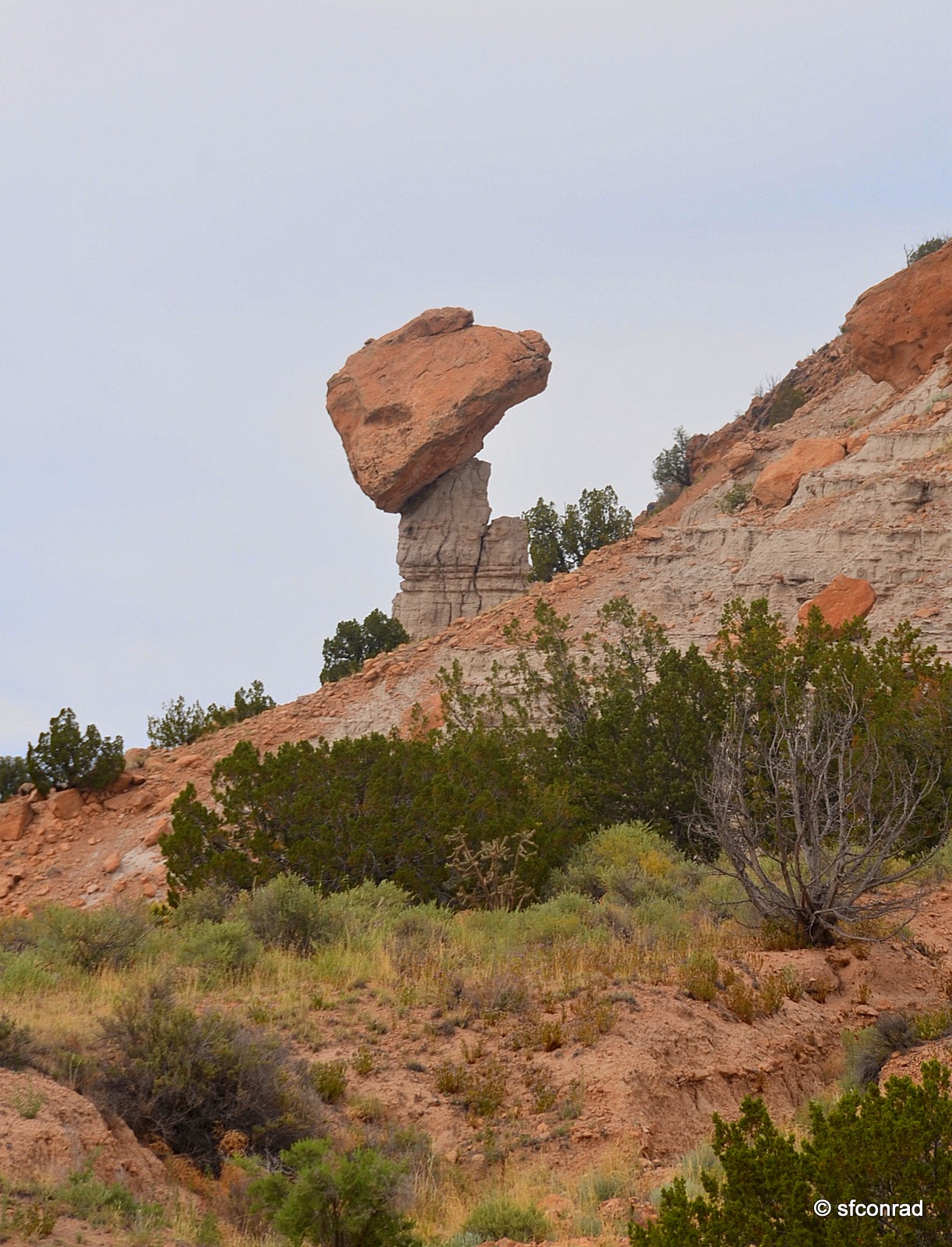 Of late, making a certain decision has not been an easy undertaking for me. At the end of my federal law enforcement career I was responsible for over 700 people and officers and several offices. Often life and death hinged on the decisions I made and the decisions made by those above me. When I retired I just didn't want to make any more tough decisions.

Yesterday, I felt like that boulder in the first photo above, hanging on the edge. And as shown in the photo below of Doodle and Eddie, I just didn't know which way to go as I was pulled in opposite directions. My heart was telling me one thing and my head was telling me another. 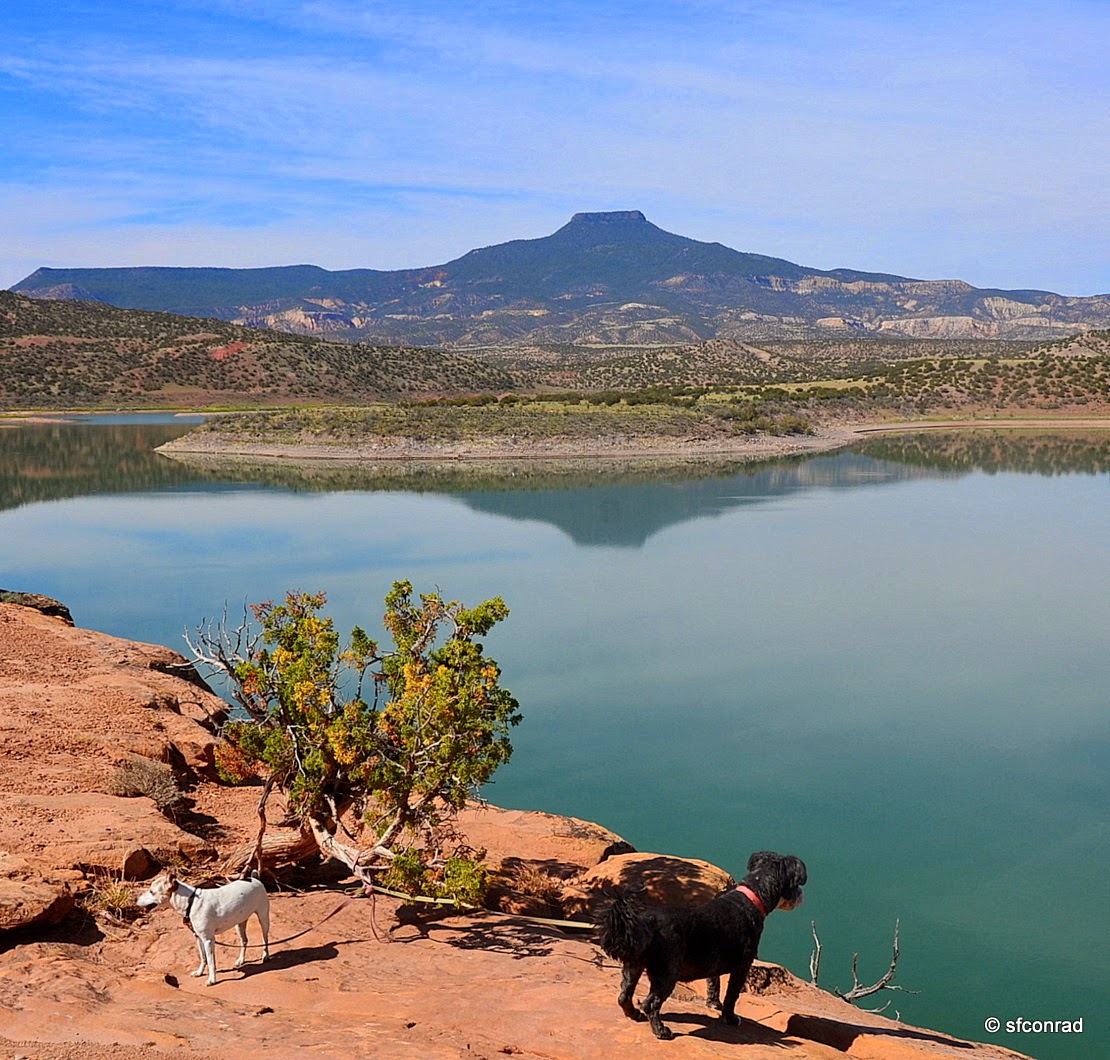 Doodle is wanting to go in one direction and Eddie is looking in the opposite direction. 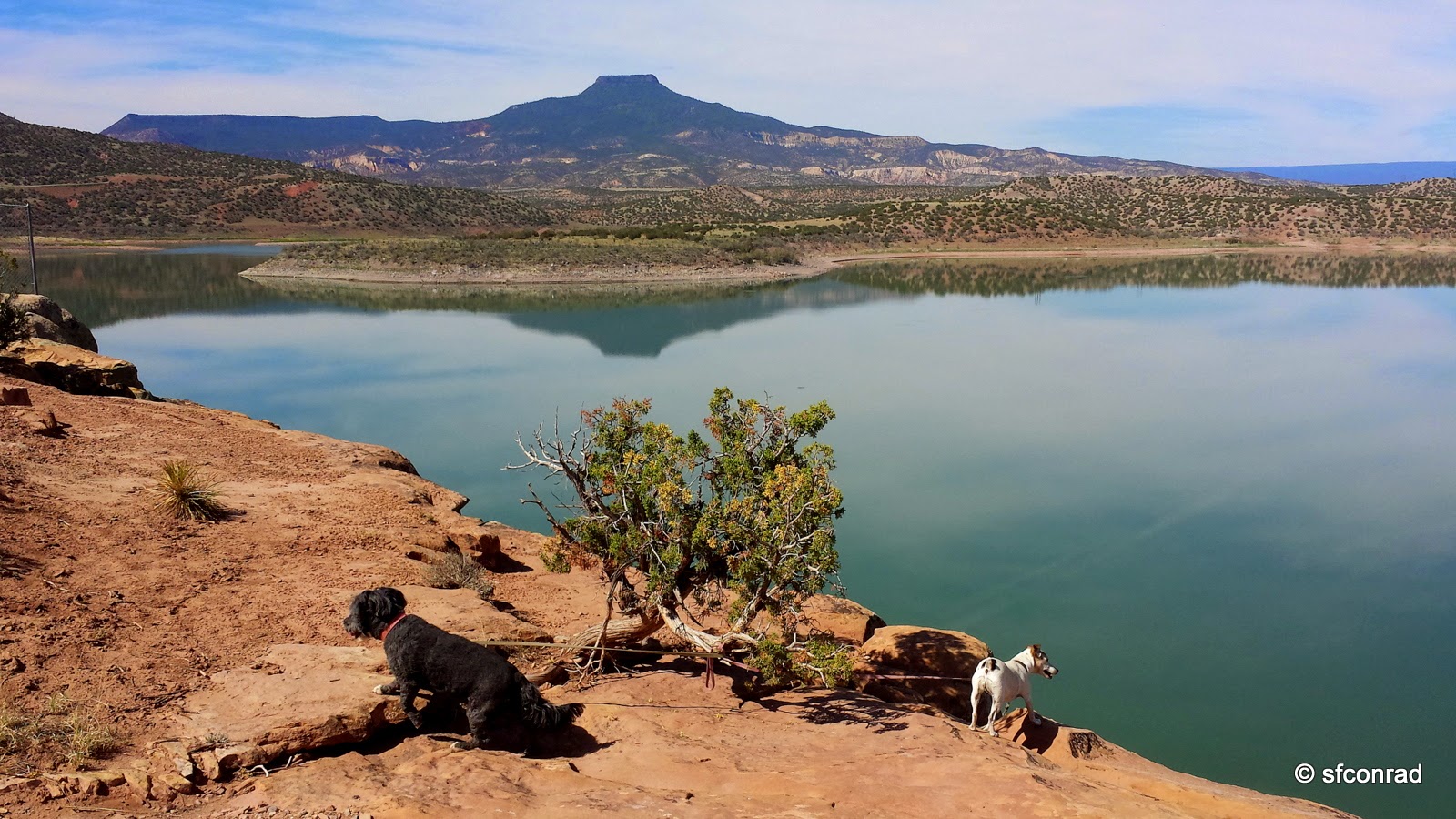 And like Doodle in the scene above, I felt like I was standing on the edge of a cliff. Also, like the two of them, I keep changing my focus on the direction I am heading in. Got to remember, "God's will; not mine!! and "In God's time; not my time!!"

So how did I get to my current location? When Evin I separated in December we were in Katy, Texas visiting my son Trent and his family for Christmas. From there we had planned to head west and catch up with our friends Carol Ann and Steve Dwyer. They planned to be boon docking in Quartzsite, Arizona with some Escapees' friends in January.

I called Carol Ann and Steve and told them of my status change. Without hesitation, they told me to come on with Eddie and Doodle for there was a man there I just had to meet and that he would introduce me to several single RV groups. So off the PUPS and I go.

While there, I joined WIN (Wandering Individuals Network), a singles RVing group know for hiking, biking and kayaking. Later, because of unforeseen circumstance, I changed plans and decided to stick with the WINs group as they traveled through Arizona in February through May. If I liked their lifestyle, I planned to move on with them to Kanab, Utah on May 19. Then on to Nevada, California, Oregon, Washington and Idaho. 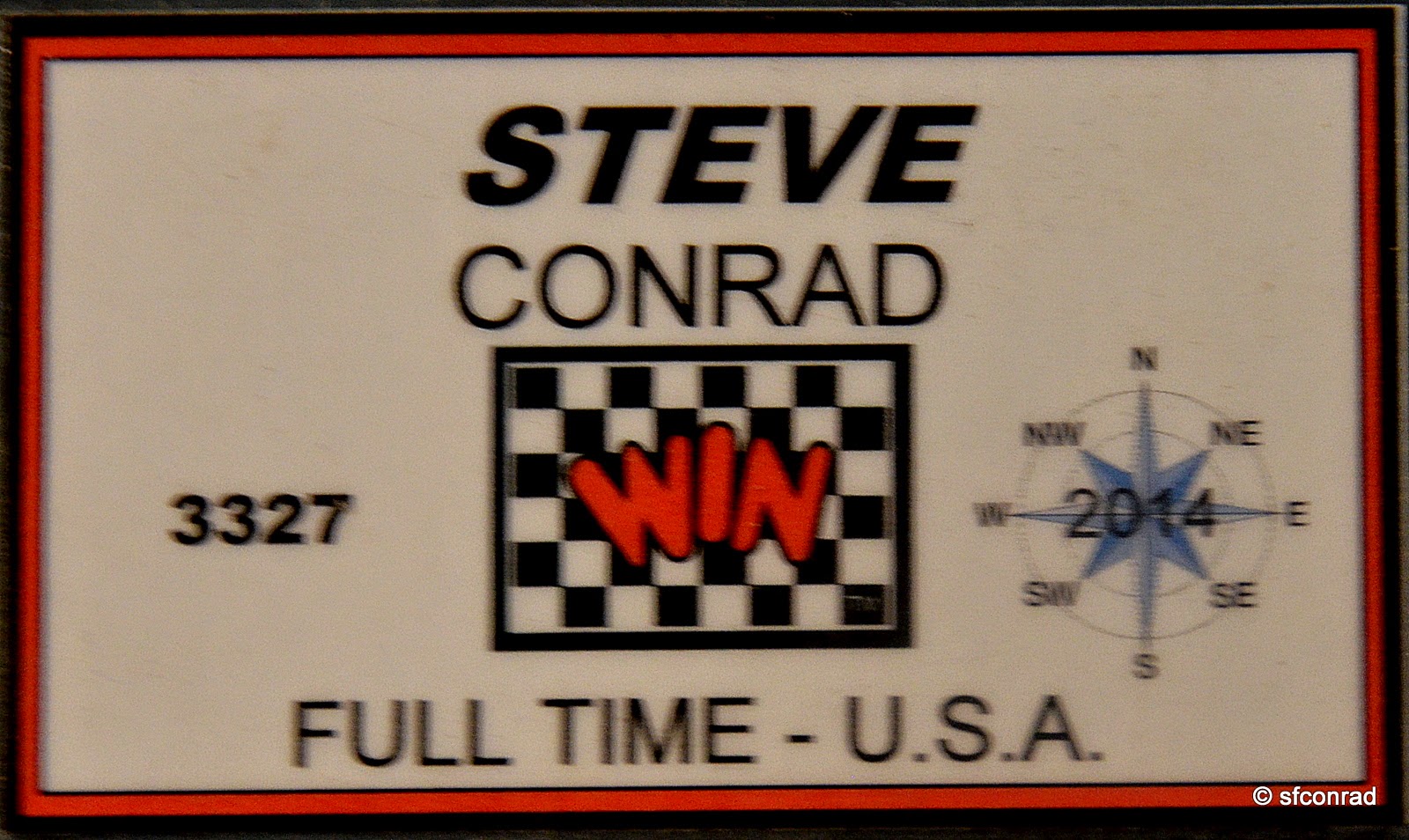 And like the directional logo on my membership badge above, there are lot of directions to go in.

After Quartzsite, I had originally planned to follow my Escapees friends to Lake Havasu for the annual fireworks display. But as noted above, and as fate would have it, the RV broke down once again. So I headed to Tucson instead and as it turns out a group of WINs had gathered at Casino Del Sol just outside of Tucson.

I made the most of the RV problem and chose to enjoy the WINs and Tucson. When the group moved a little further south to the Black Diamond Casino, still on the outskirts of Tucson, I moved with them. I decided to "...take it one day at a time."

From Tucson it was on a little further south to Tubac. From there it was Sonoita and Patagonia. Then we went a little east and south to Sierra Vista where I joined the Elks. From there to the Escapees park in Benson where I ran into some of my Escapees friends from Quartzsite. Next we headed north to Roosevelt Lake. Photos of all these adventures are in previous blog posts or will in time be posted.

From Roosevelt Lake the WINs group traveled to Payson, Arizonia (my friend Carolyn's favorite place other than Twin Falls, Idaho). By chance, while staying in the Elks campground there I meet a group of locals my age that walk an hour everyday at various locations in and around Payson. On some days they do hikes out in the boonies. I was invited to join them, bad knee and all.

Again, by chance, I met Chuck who was to become a constant walking companion for the next six weeks and a true and valued friend for life. When the WINs group moved on after four days, I stayed. Part of the reason was my banged up knee and the other was that I really enjoyed the new friends I made through Chuck-- his wife Gerry and their friends Cindy, Patti and Jim. Plus I found a church through them that spoke to me and together those named above experienced a miracle.

But back to the boulder and Doodlebug teetering on the edge. Neither RVing full-time nor the selling of my house was my idea. My friends Zell and Cindy suggested RVing to Evin and me. Evin was gung ho. She was sure it would be a cure all for everything that was wrong with our lives. I never planned to go on the journey alone. Evin insisted that my home had to be sold so she could be worry free while on the road. If you follow PUPPY PATHS from the first post, you know the story.

So I finally leave Payson, Arizona to meet my WINs friend Pat in Durango, Colorado for a week, still thinking of heading east. As you may have seen in earlier posts, I make new friends there through Pat. I look at a map and see that Abiquiu is only about 165 miles southeast of Durango. So, on May 28, it is off to Abiquiu for a day or two. Then I planned to return to North Carolina with a possible side trip flight to New Hampshire to attend my grandson Aidan's high school graduation on June 13. I also hoped to change my "alone" status. But that decision was not mine alone to make. I didn't get the answer I wanted and so today, I remain alone. No offense meant toward Doodle and Eddie.

Since going to the East appears to be out, in which direction do I head? If I wasn't going to New Hampshire for the graduation, then I planned to go to Colorado Spring for Aidan's swearing in at the United States Air Force Academy. Again, another person made a decision that maybe that was not the thing to do.

If I am going to rejoins the WINs do I go south to Interstate 40 or north to Interstate 70? For three days now I have prepared the RV for travel, only to stay in my current spot. I have made the most of those days and my stay here.

God put a new special friend in my PATH, Nikki. We enjoyed several fun and action packed days together before she and her pup, Olive, moved on toward their planned destination of Northern Carolina. Eddie fell in love with Olive and Doodle didn't seem to mind.

When the decision was made by another that affected which direction I was to head what follows is what I experienced on that first day. I will start with what it looks like from inside the motor home. 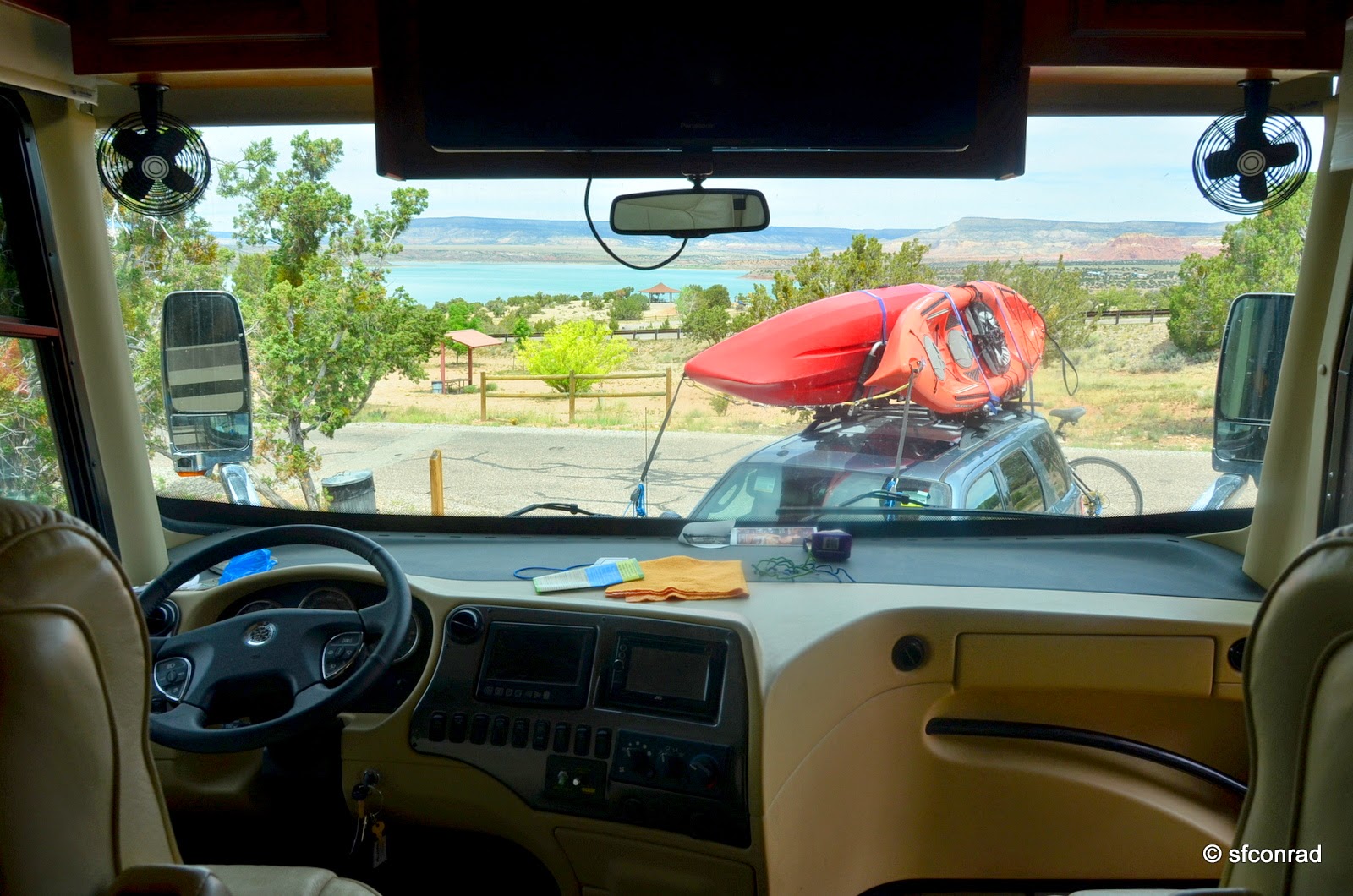 Above is the lake view out our windshield. 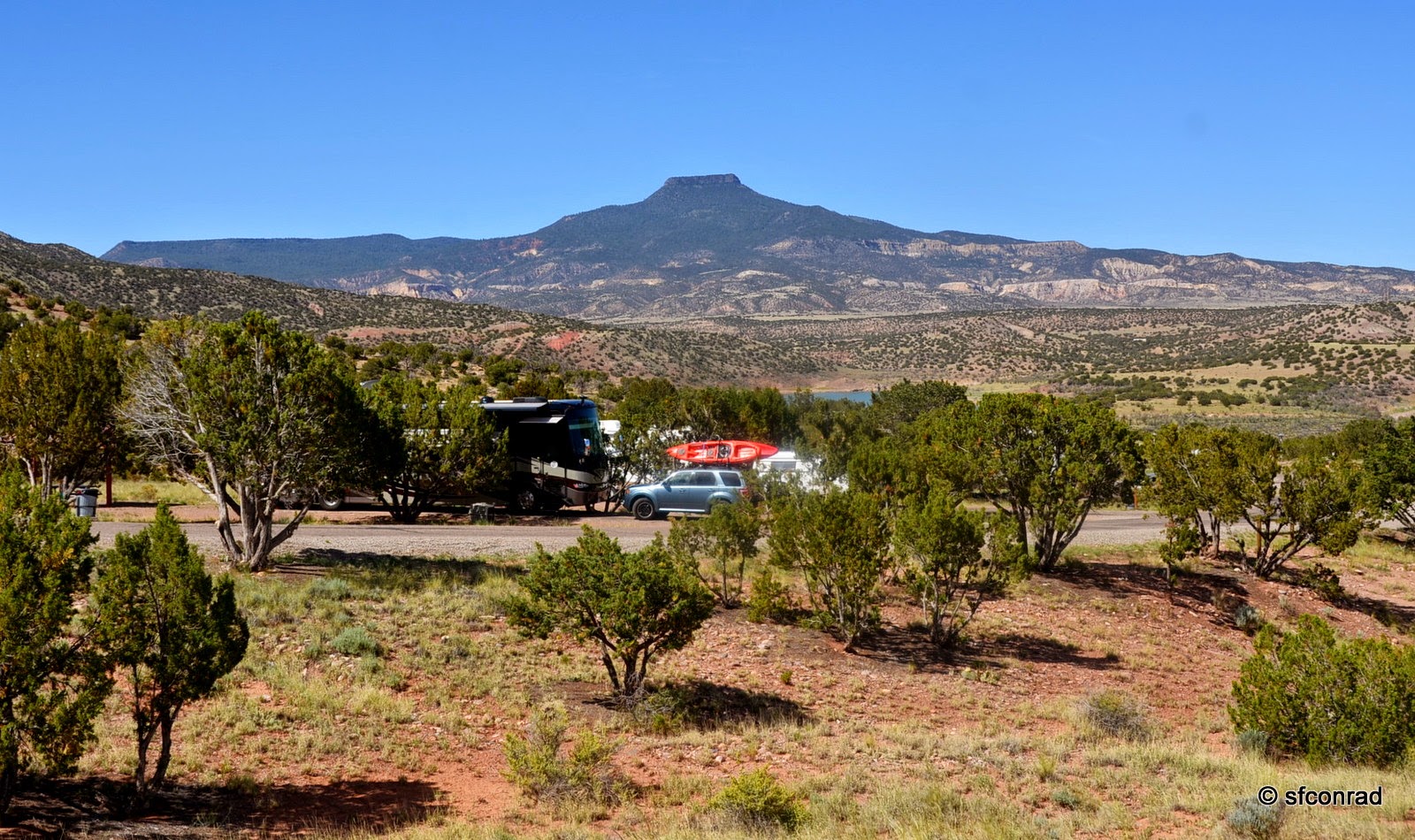 Above is the PUPS and my current location. Below is the same scene just a few hundred yards down the PATH from our campsite. 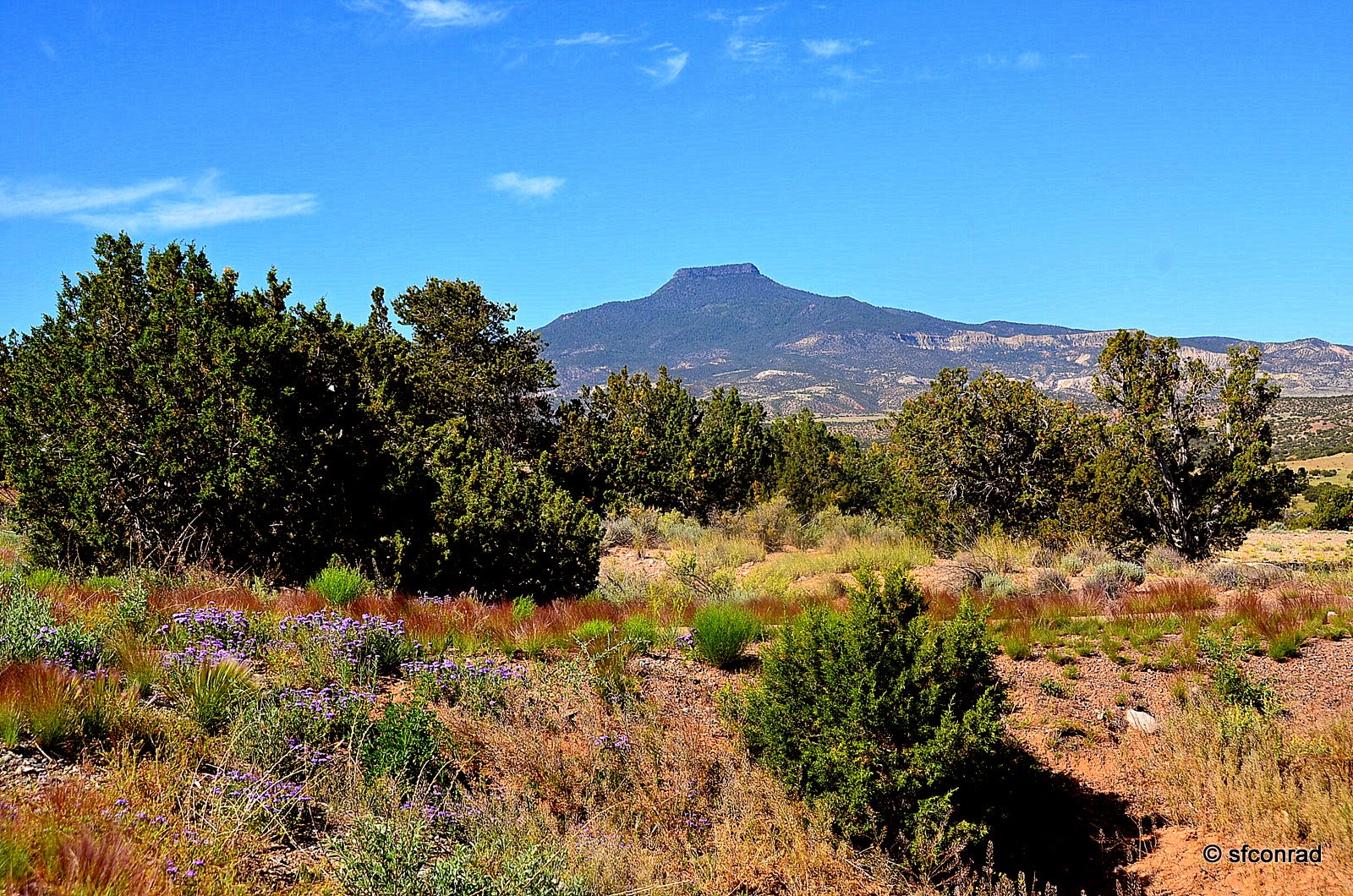 Above is the view from our picnic table which is at the rear of the motor home. The two photos that follow below are to the right of the motor home a little and can be seen out the windshield. Later you will be shown what sunset looked like the first night I made the decision to head to the West instead of back home to the High Point area in the East. 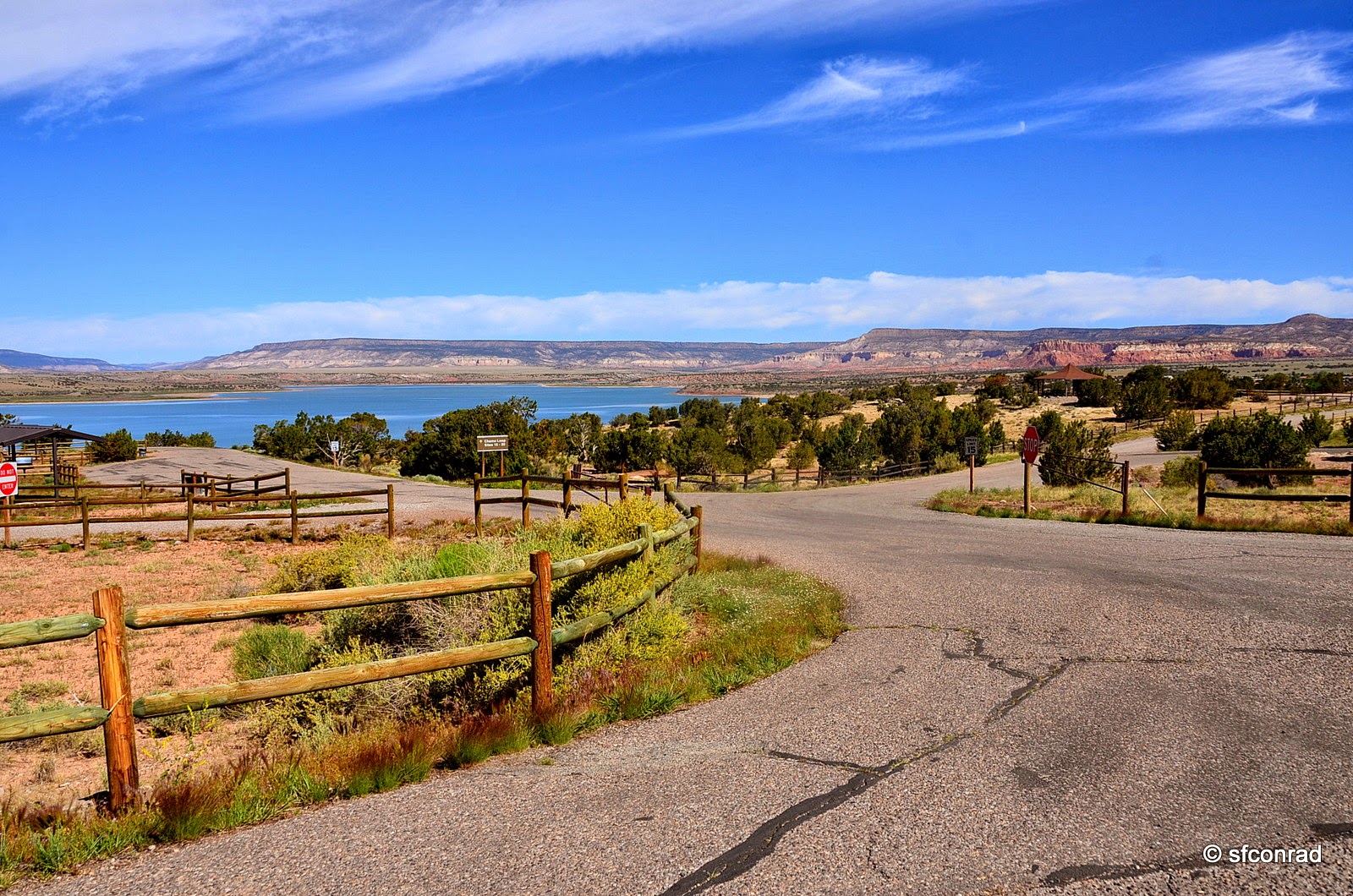 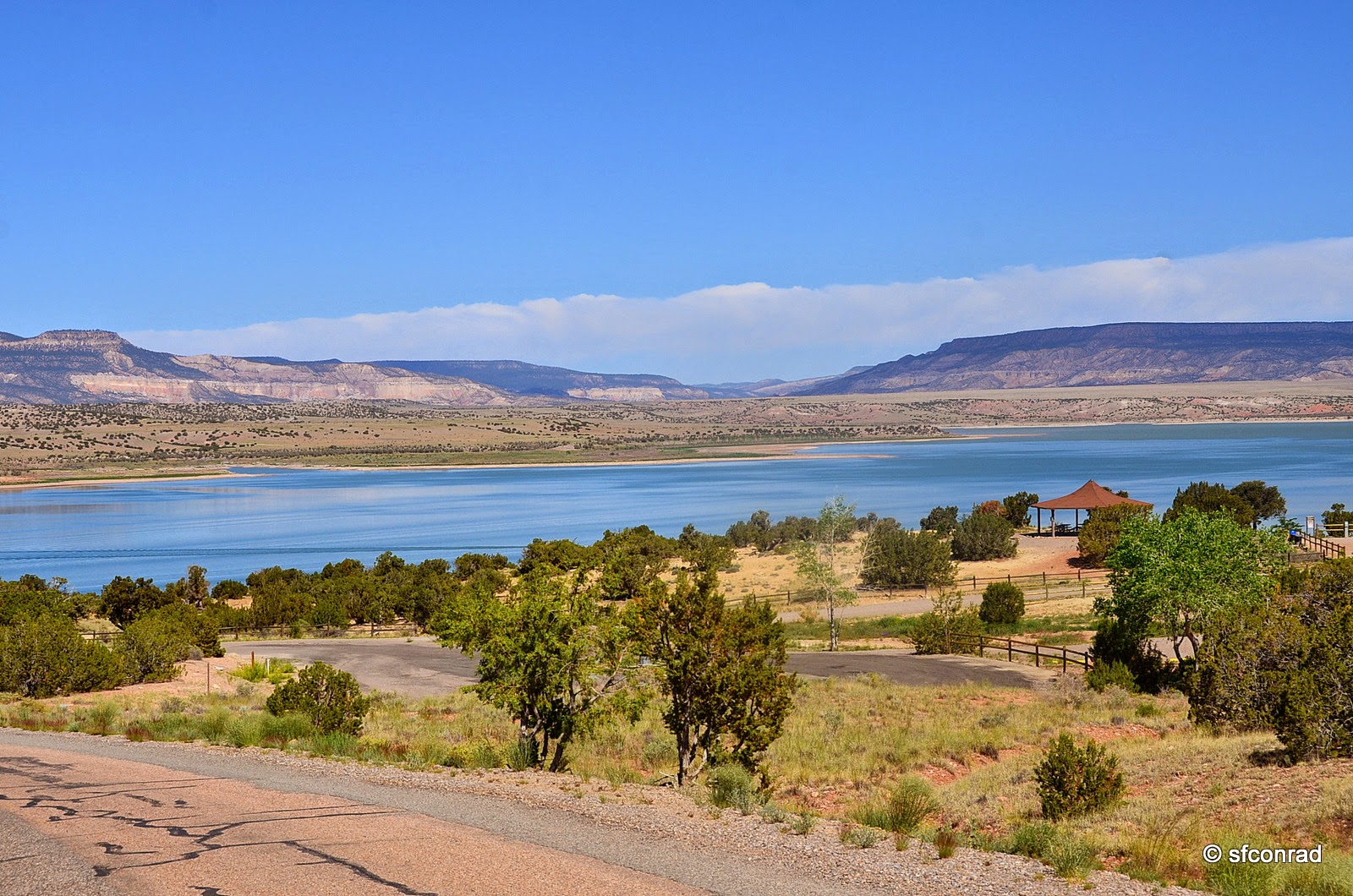 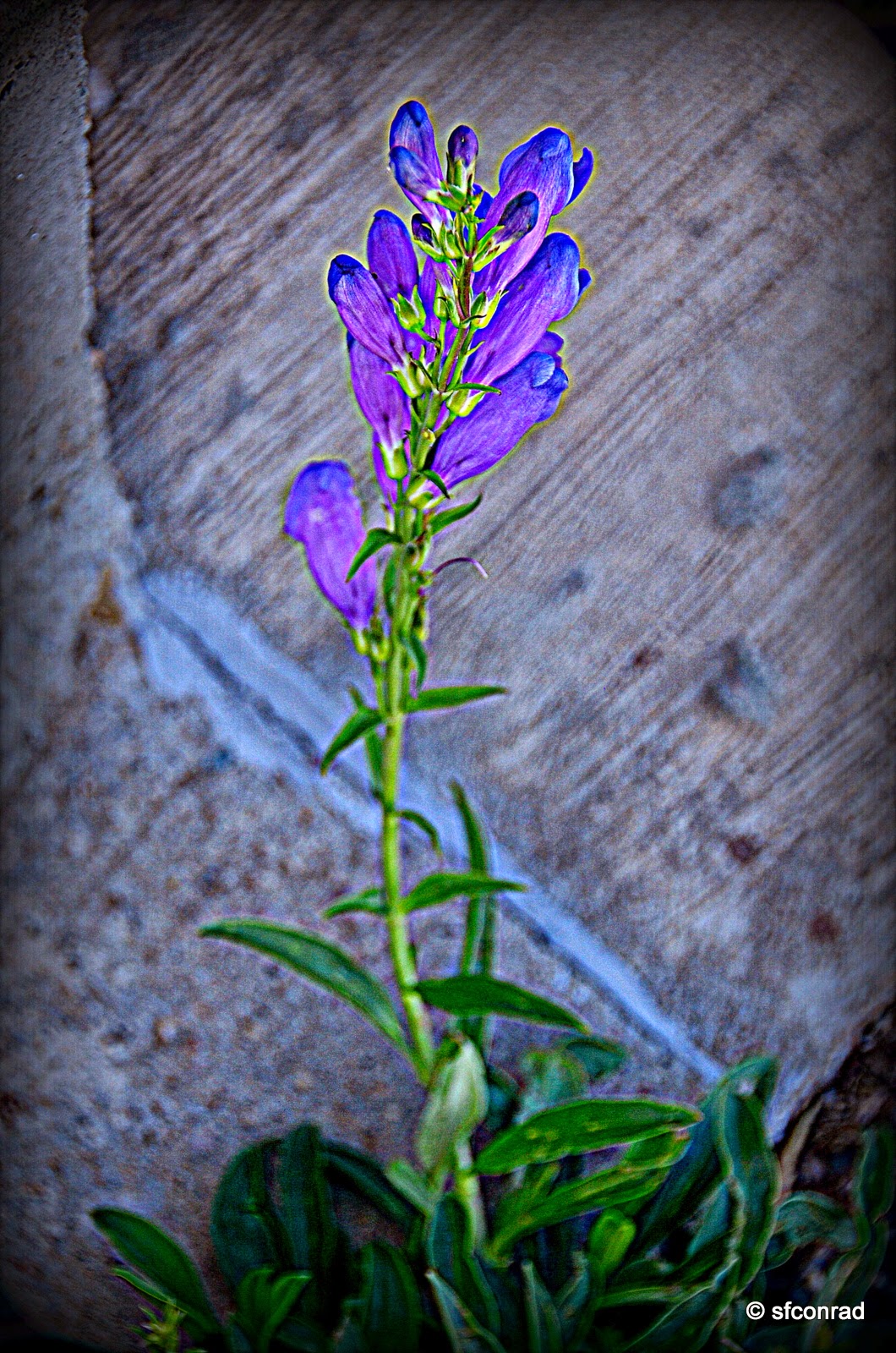 The flower above was growing out of the pavement at the guardhouse at the entrance to the Corps of Engineers Riana Campground. We have made a daily tip to the gatehouse to tell the patient attendants that the PUPS and I wanted to stay just one more day for we didn't know which way to go or what PATH to take.

After making the decision to head to the West I decide that the PUPS and I would go on an adventure and not stay in the motor home where I could lay around and feel sorry for myself. I knew that it was time to practice what I often preach and that I had to "let go and let God."

So off the PUPS and I go on "...the first day of the rest of our lives!!" Just two or three miles away from the campground I had to pull over and take in the view heading south on Highway 84 toward Abiquiu. 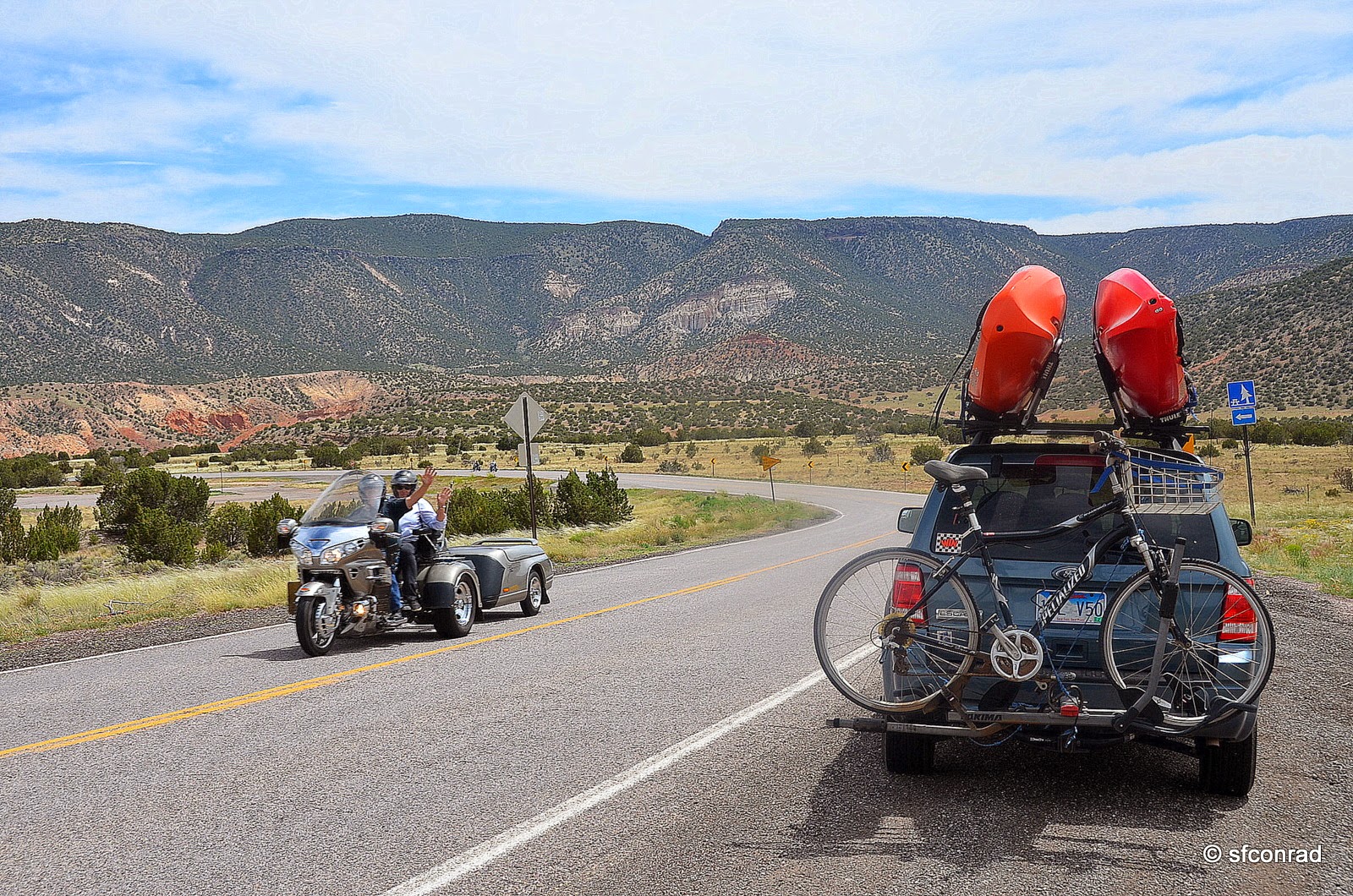 As I get out of the car with my camera I look to my right and I see something pink in the desert... 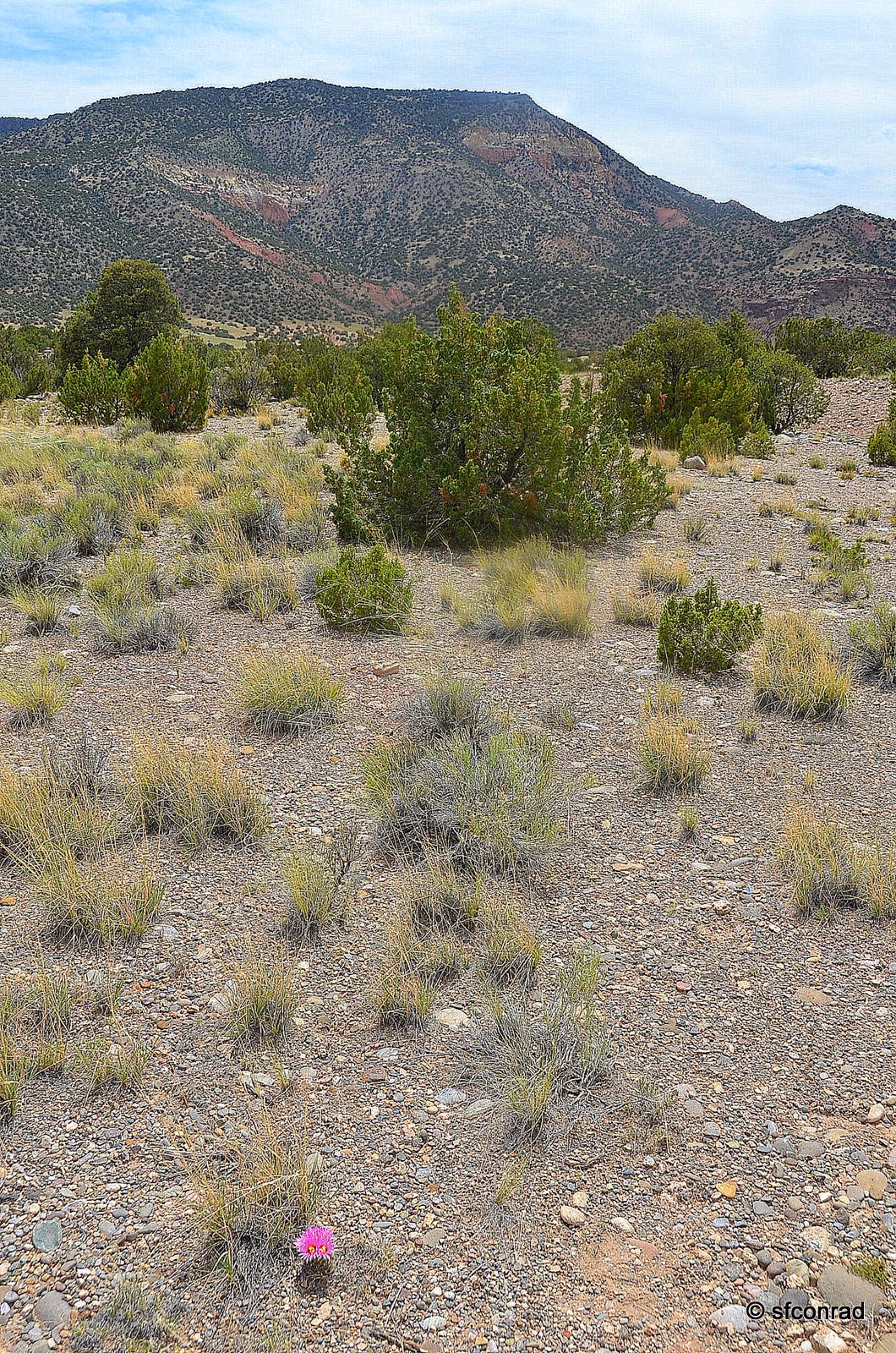 Can you see the little pink cactus in bloom in the left bottom of the above photo? 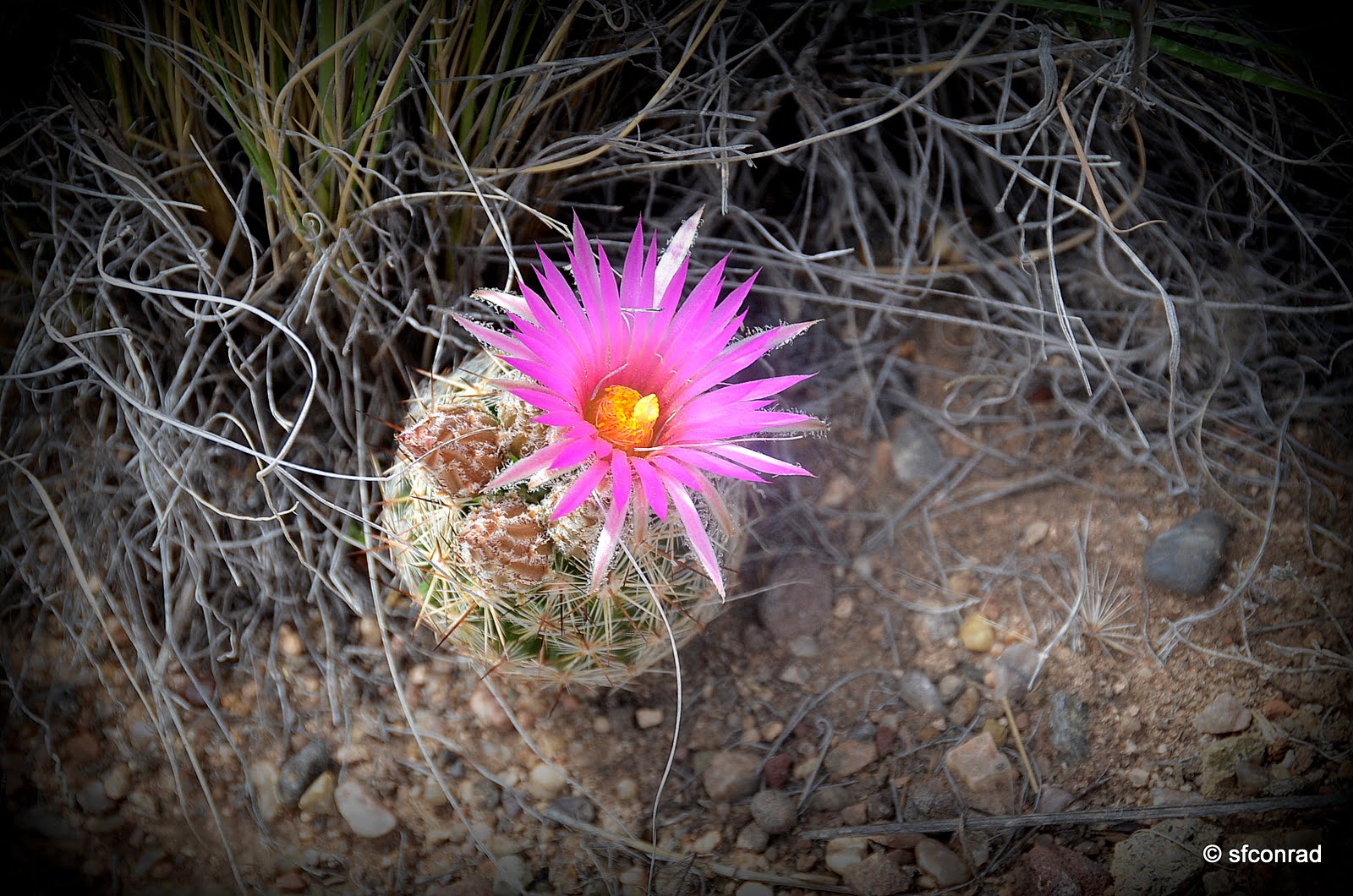 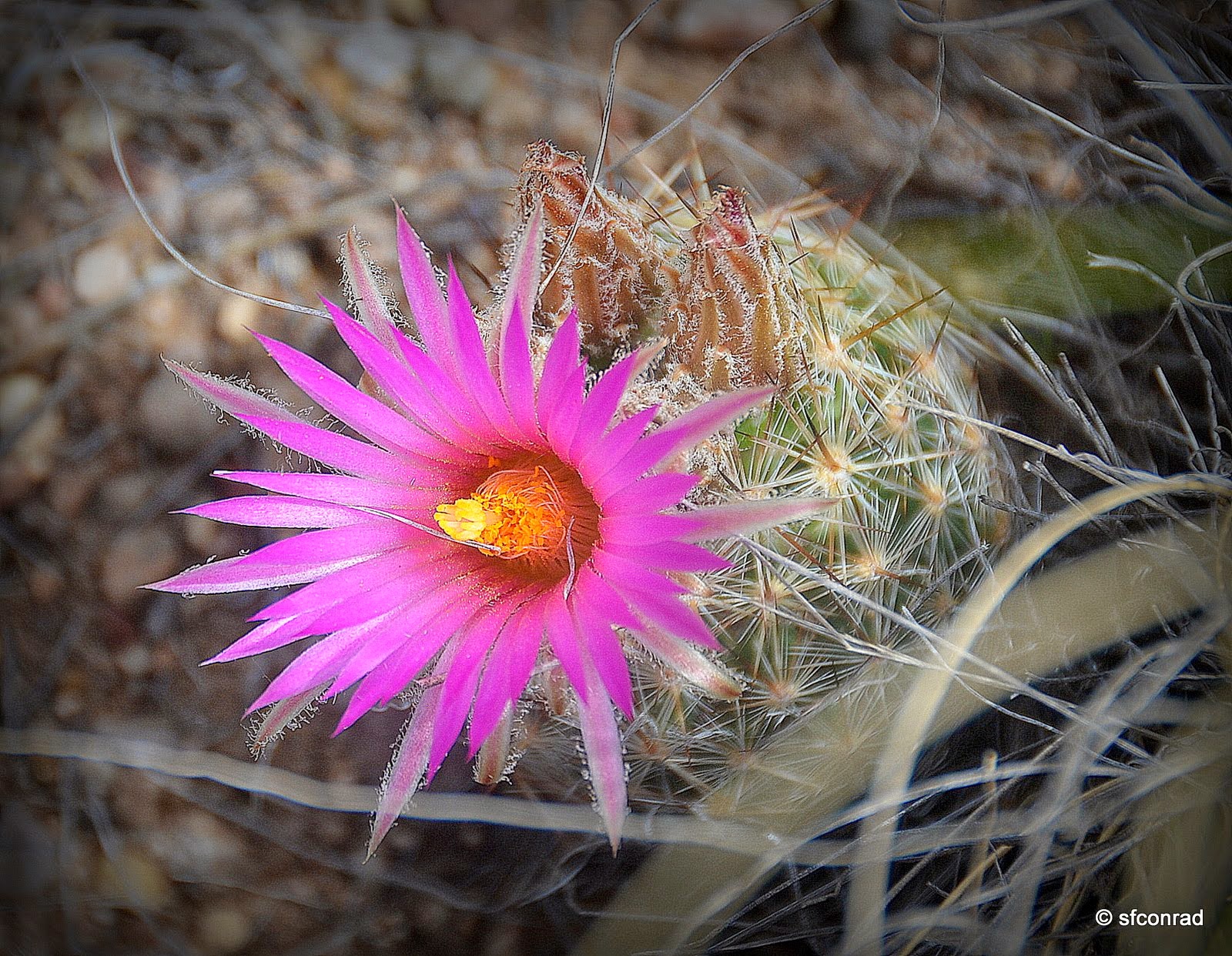 I walk around and suddenly I see more!! 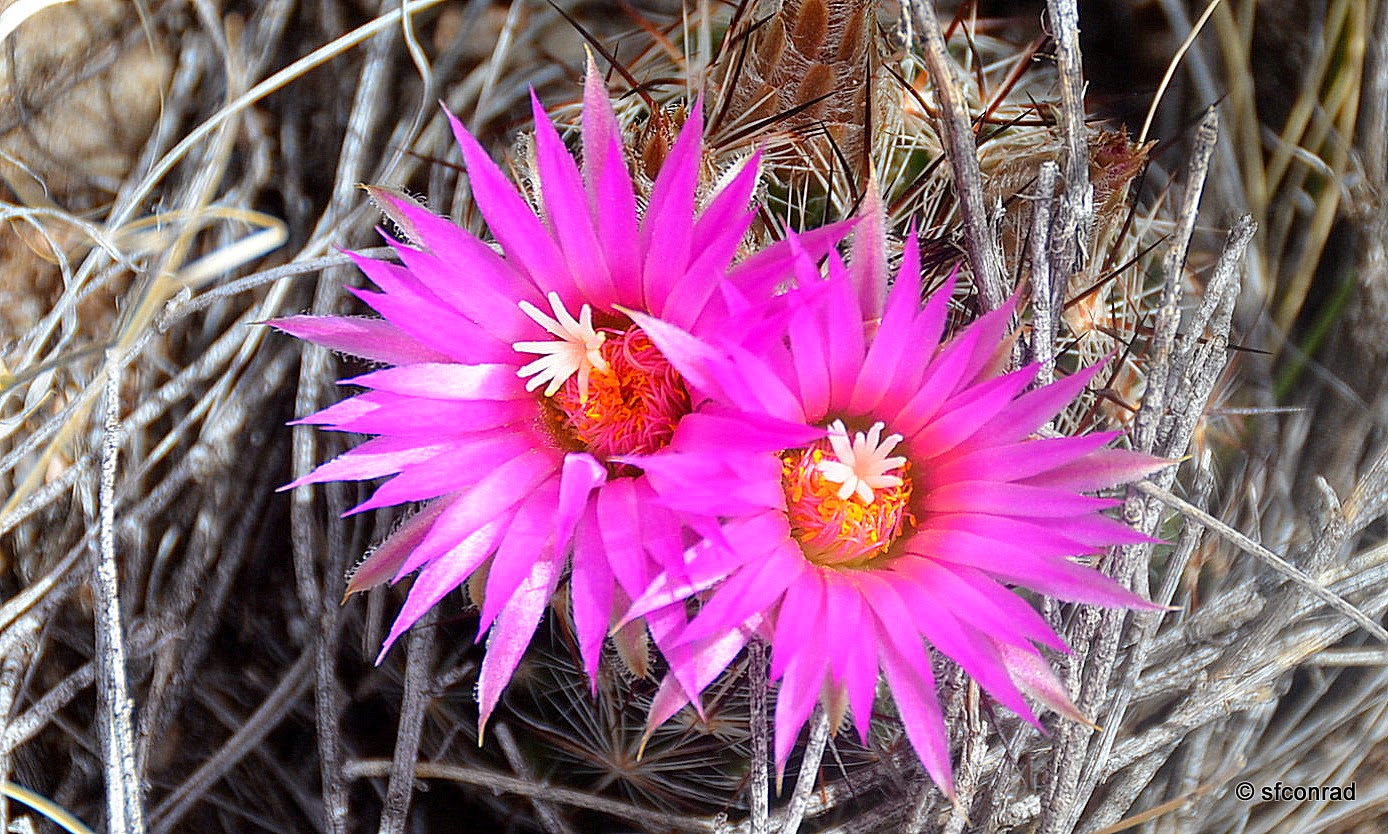 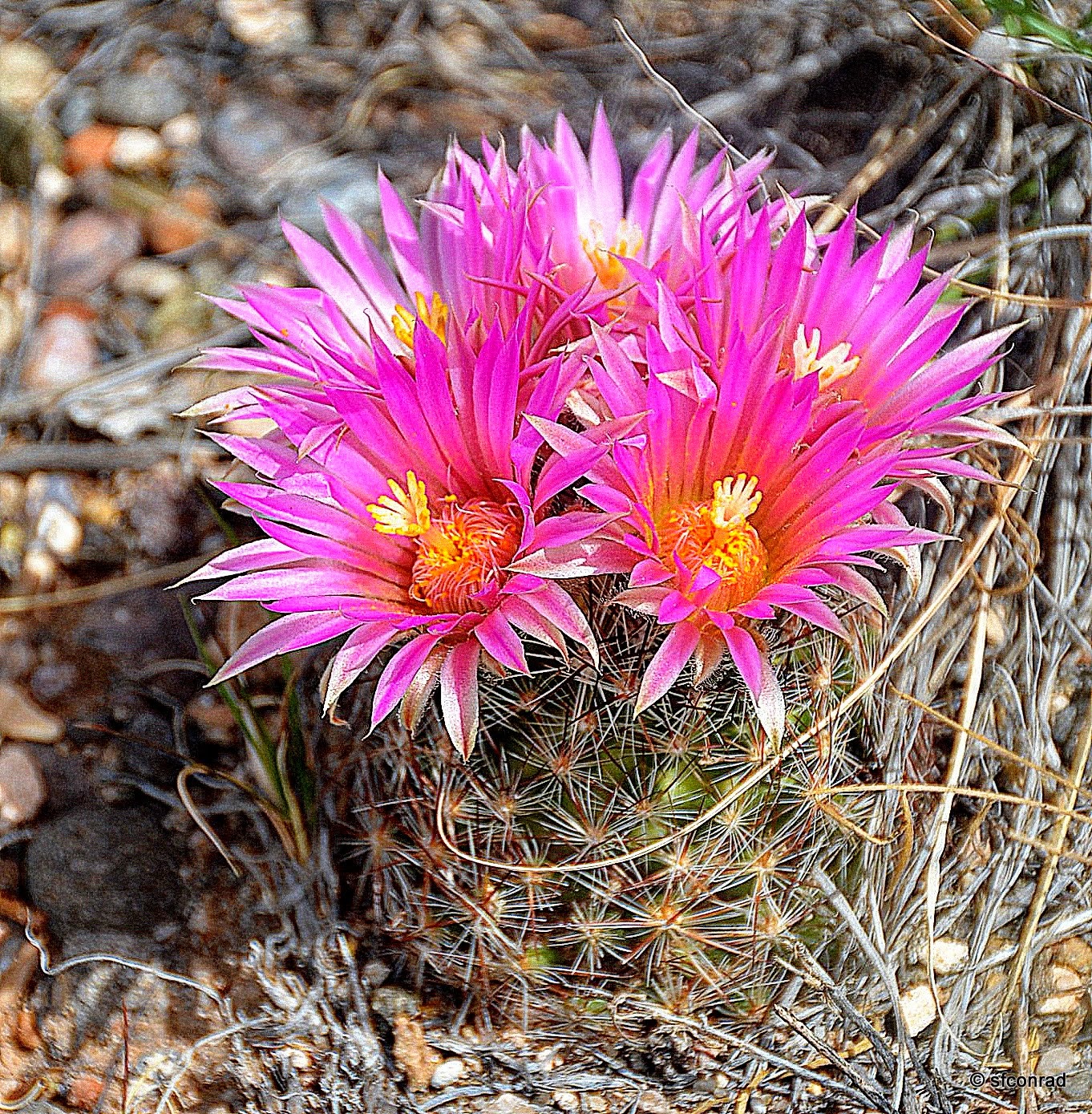 Suddenly, my spirits are lifted!! Truly, God is in charge and I look forward to the day ahead of the PUPS and me!!

Stayed tuned, Part Two of our first day will follow shortly. I am hungry and adventure calls. Got to move while the sun is shinning.