Green flashes and green rays are optical phenomenon that occur shortly after sunset or before sunrise, when a green spot is visible, usually for no more than a second or two, above the sun, or it may resemble a green ray shooting up from the sunset point.

The reason for green flash optical phenomenon is refraction of light  (as in a prism) in the atmosphere:  light moves more slowly in the lower denser air than in the thinner air above, so sunlight rays follow paths that curve slightly, in the same direction as the curvature of the Earth. Higher frequency light (green/blue) curves more than lower frequency light (red/orange), so green/blue rays from the upper rim the setting sun remain visible after the red rays are obstructed by the curvature of the Earth.

Most every evening around 5:30 a group of fellow RVers gather at the Knights Key Campground Tiki Bar and watch the sunset in hopes of seeing a green flash. On December 12 a green flash occurred and a neighbor of ours, Sally Harper, caught the optical phenomenon with her camera. Sally gave me permission to use the photo from her blog "Travelin' On"  found @  http://www.sallyharper.blogspot.com/. 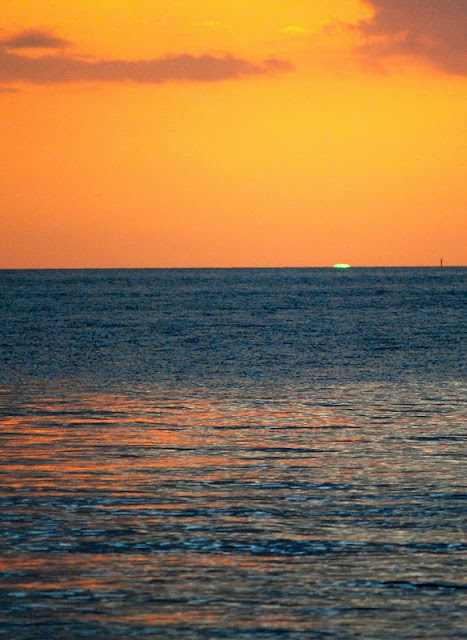 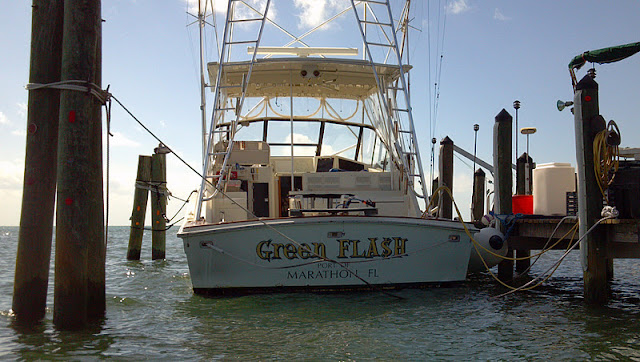