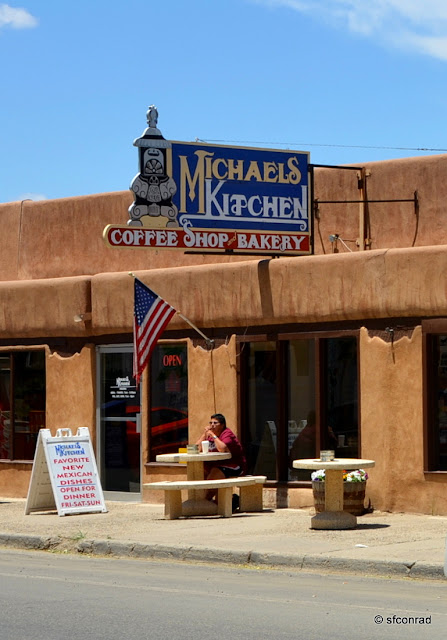 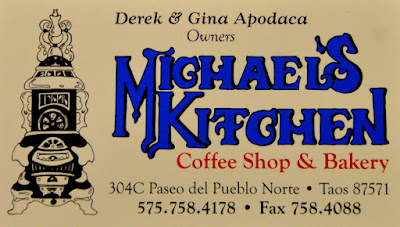 Upon first glance from the Taos street unless there is a line out the door,which is sometimes the case, Michael's Kitchen - Coffee Shop & Bakery seems to be an unassuming quaint little coffee shop and bakery frequented by maybe just a few local patrons.

The first time I visited Michael's I had driven a new RVing friend over from Abiquiu Lake just to eat there, over 60 miles!! My RVing and photography guru, Carol Ann, suggested that I not leave New Mexico without eating there. She told me to order the Spanish omelet with green chilies. I ordered a cheese burger; but, my new friend Nikki followed Carol Ann's suggestion. Nikki shared a bite with me, and the rest is history. Guess what I now order every time I go to Michael's Kitchen????? 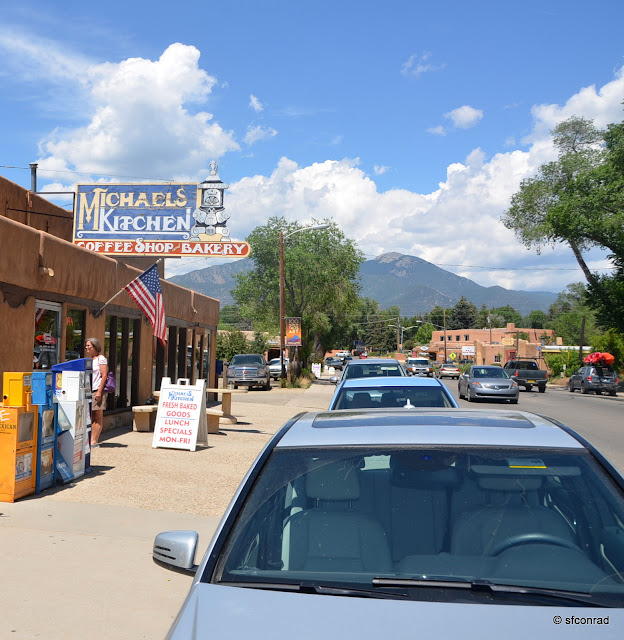 Evin entering Michael's. "Bashful" Evin did not know what was in store for her on this day. We go in and are seated. Our waiter comes to take our drink order and I ask him if there is a Michael. He says there is but that Michael's step-daughter Gina and her husband Derek have been the owners for over ten years. He offers to take me to meet them as they are just finishing their own lunch.


Well, you know that I didn't have to asked twice... 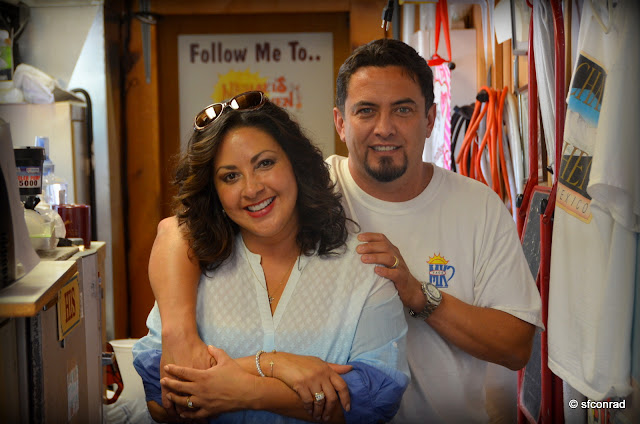 Gina & Derek Apodaca, Michael's second generation owners, greeted Evin and me with a warm smile and made both of us feel very welcomed. Derek offered to take us on a tour of the entire restaurants which by the way was packed with patrons. I begged off because even I could tell they were very busy. Gina gave me a big smile and said, "You're a welcomed diversion, so let's go sit and chat in the office, we're glad you care about what we are doing here at Michael's."

Within what seemed like just a minute or two we shared our backgrounds. I told them that I had retired from federal law enforcement and that Evin and I were full-time RVers staying at the new Angel Fire RV Resort. Gina shared that she majored in Criminal Justice in college and had originally had planned to follow my career PATH. Derek shared that he went into the insurance business after college. About the time the company Derek was working for was being sold, Michael, Gina's step-dad, decided he wanted to sell the restaurant. The rest is history.

As I said, I like the Spanish omelet anytime of day. Evin and I have split it and the chile relleno and/or the bacon cheese burger. 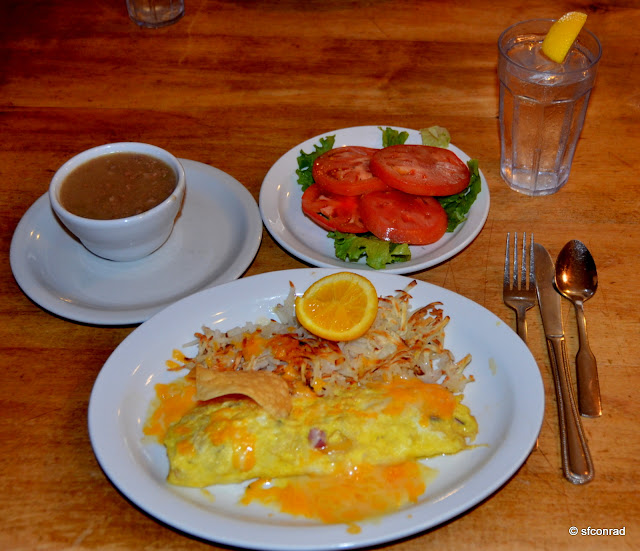 I recommend ordering the green chilies on the side just in case Gina and Derek get in a batch of hot green chilies. These were just right, mild but with a great taste. There is a choice of several sides. When I eat breakfast at Michael's I get a side order of pan cakes. 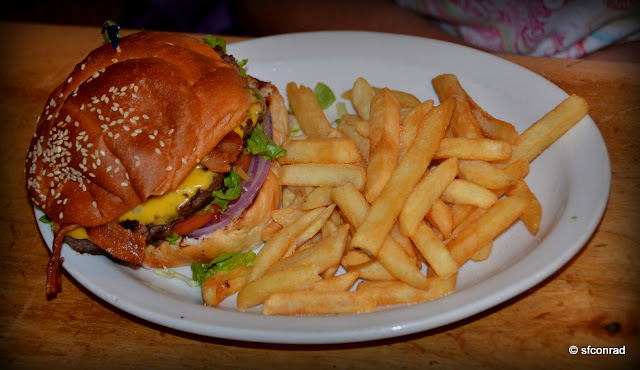 After Evin and I literally almost "licked our plates", Derek graciously took us on a tour of the entire restaurant from top to bottom and explained each process along the way. 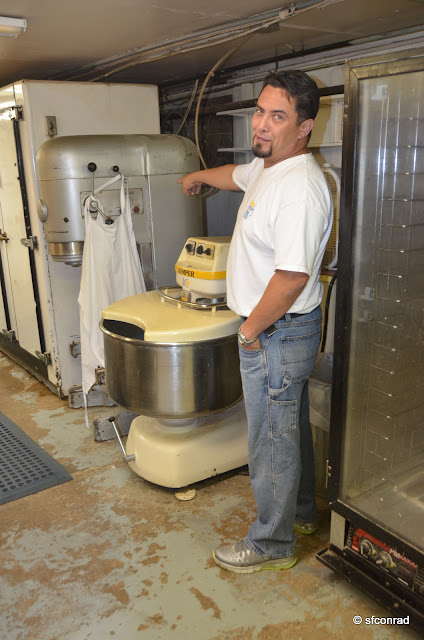 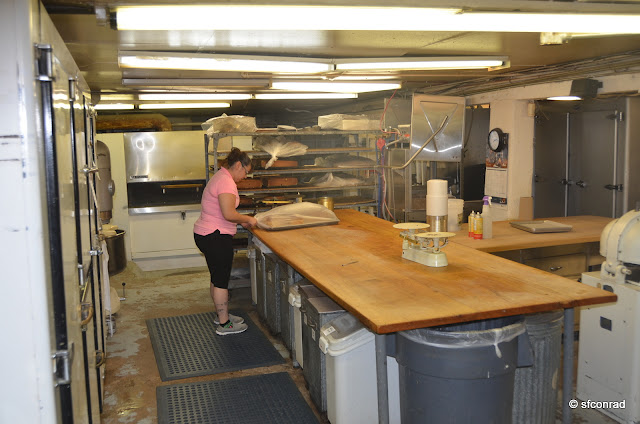 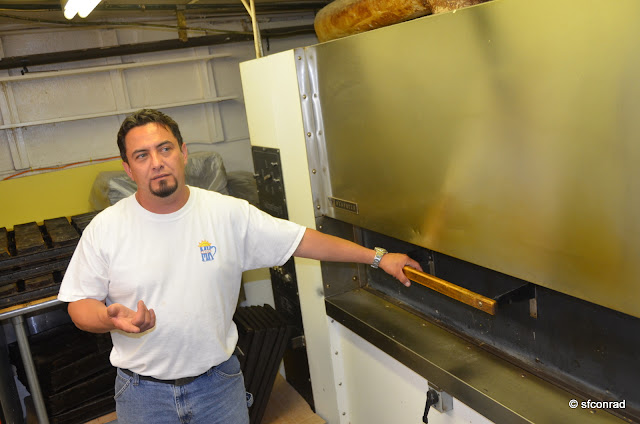 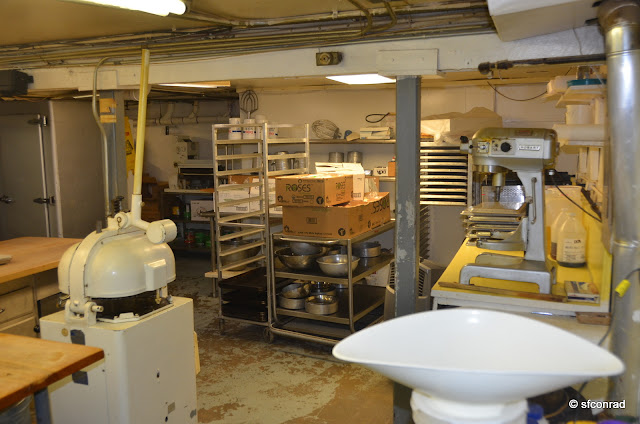 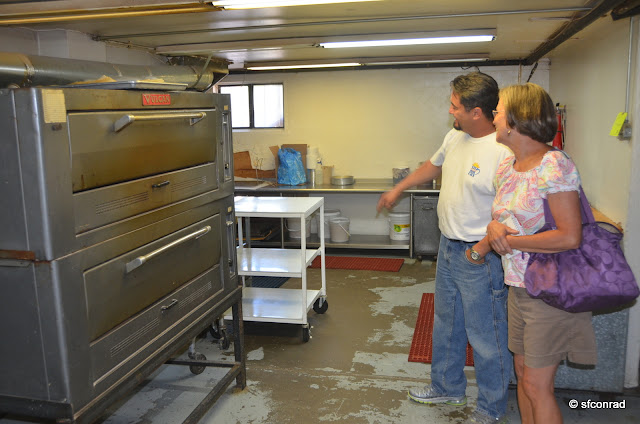 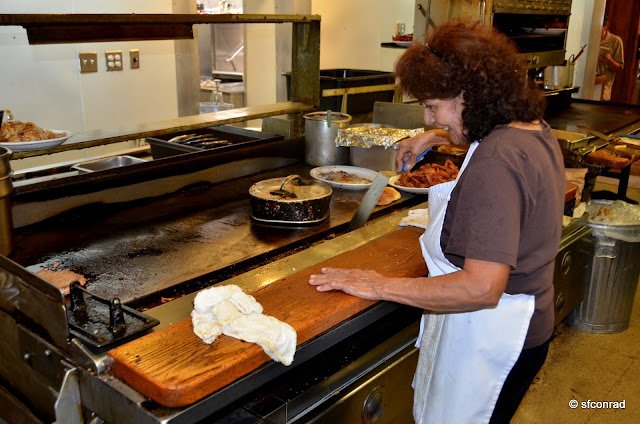 Derek introduced Evin and me to Delores and explained that she has been working at Michael's Kitchen for 56 years. Evin and I overheard one waitress tell her party that she had worked at Michael's for over 25 years.

No meal at Michael's Kitchen is complete without their homemade desserts. Derek had shared with us their doughnut making process after learning that we lived in Winston Salem, North Carolina - Home of Krispy Kreme Doughnuts. The same waitress suggested to the couple beside of us to order their dessert at the same time they ordered their meal because they sell out early!! 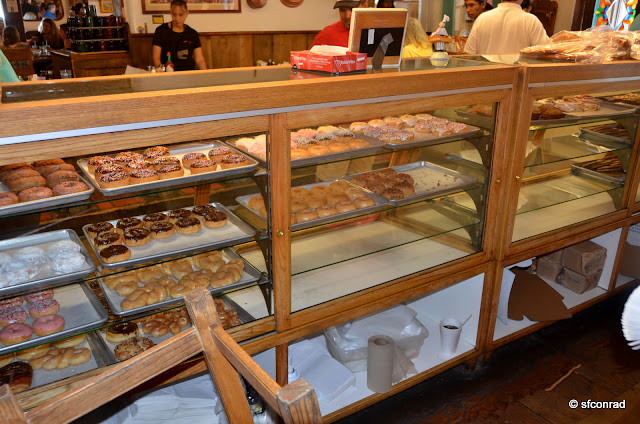 WELL, Evin and I were so full that we did not save room for dessert the other day. As soon as I hit "Publish", we're taking the PUPS with us on a PATH to...

After all, it is only about 21 miles from Angel Fire RV Resort. Nothing like the 60+ miles from Lake Abiquiu. Well worth the effort!!
Posted by Steve Conrad at 1:53 PM